HOME
What Should You Do?
Outdated Panels
Zinsco Panels
FPE Panels

Federal Pacific Electric Company (FPE) was one of the most common manufacturers of circuit breaker panels in North America from the 1950s to the 1980s. Millions of their panels were installed in homes across the country. Yet, as the years passed, electricians and home inspectors often found Federal Pacific Electric panels failed to provide proper protection to homeowners and their families. Experts now say that FPE panels can appear to work fine for years, but after one overcurrent or short circuit, they can overheat and become fire hazards.

In a class action lawsuit, a New Jersey State Court ruled that the Federal Pacific Electric (FPE) Company “violated the Consumer Fraud Act because FPE knowingly and purposefully distributed circuit breakers which were not tested to meet UL standards…” (To see the Class Action Settlement Notice issued for New Jersey Residents, click here.) An expert who investigated the potential hazards of Federal Pacific Electric panels stated under UL 489 test conditions, that FPE panels fail to trip at a much higher rate than standard panels.

When a breaker fails to trip, an extreme amount of power from the outside electrical supply surges into a home’s panel and circuits. Once that happens, it cannot be stopped or shut off manually. Electricity will burn until it runs out of fuel or the wires melt. The panel could overheat and catch fire, causing serious harm to a home and its occupants. Many Federal Pacific Electric panels and breakers can operate properly for years. But if and when they do malfunction, a disaster could occur.

The Panels Can Be Dangerous 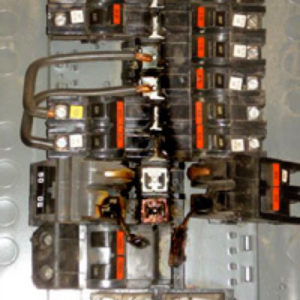 The homeowner had no way of knowing that too many electrical devices were plugged into one room. The devices required more electricity than the circuit could provide. “The wiring got hot enough to fry an egg,” the electrician reported. Normally, the circuit breakers should trip to cut off the electricity and prevent a fire. The Federal Pacific Electric breakers did not operate properly, resulting in two circuit breakers and a bus bar being burned.

Experts report that Federal Pacific Electric (FPE) circuit breaker panels may have three major faults that could pose a danger:

Federal Pacific Electric panels were produced from the mid-1950s well into the 1980s. Experts say that FPE panels produced during that time frame would not conform to today’s updated safety codes and would no longer be allowed to be sold to the general public. Safety standards that were once acceptable years ago are no longer considered safe. Some of the examples cited by experts as to why FPE panels would not pass today’s updated safety codes are:

Experts report that the identified design flaws in FPE panels are not shared with other panels of similar age. Specifically, examples of design flaws in Federal Pacific Electric panels include:

Using UL 289 test conditions, the Consumer Product Safety Commission (CPSC) found that Federal Pacific Electric panels may be unfit for homes. The materials used to construct the breakers may be weak. As a result, the breakers may not trip, and the panel could be susceptible to catching on fire.

Federal Pacific panels have at least five design issues that are no longer allowed by code: the gutter space, the wire bending space, spring-mounted bus, breakers that are on when down, and the split bus service equipment. These issues mean that a panel that has been sitting on the hardware store shelf for 20 years would not meet today’s code, despite the UL listing of the panel at the time it was manufactured.

Most breakers in a home are never called upon to trip, and the homeowner's perception is that ‘the breakers work fine.’ The same observation could generally be made if there were no breakers (or fuses) at all, just a hardwired system. In the event of an electrical malfunction, however, our safety may depend on proper operation of the circuit breakers.

What should you do next?

Electrical Contractors Located in Your Community Can Help!